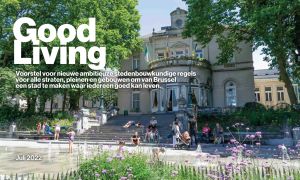 The redevelopment of the former libray site is an excellent opportunity to give open space to the building block that has gradually silted up over time. Today it goes without saying that a "tabula rasa" approach would be irresponsible. Therefore, maximum efforts are made to conserve, renovate and reuse. Together with a historically inspired garden wall, a limited and compact new volume subtly accompagnies and completes the contours of the building block. A new open and green space structure forms the backbone of the redevelopment and the existing open spaces in the block. The heights of the various volumes are aligned with the image of both the former library volume and the existing surrounding tissue. The "Bibliotheektuin" forms a new urban and lively public space. The "Kloosterhof" functions as a collective green oasis of tranquility with informal meeting and is an extension of the private outdoor space of the various homes. The limited addition of new building volume creates a balance between old and new, creating new interesting perspectives. The former enclosed rear facade of the "Portierswoning" is made visible again. Because each building acquires its own character through the use of materials and/or shape, new “grains” are created that fit seamlessly into the existing fabric in terms of scale and size. The added green space is also extended to the roofs, with the roof of the existing "Ziekeliedenvleugel" being repurposed into an accessible roof garden. The high ambitions in terms of sustainability, circular and adaptable construction are closely intertwined with the urban planning and architectural concepts in this project, and form the essence of the project. The project builds on the historic value and architectural strengths of the existing buildings on the site. Change-oriented interventions make similar evolutions more easily possible in the future and thus support a continuous evolution of the project.